The “Languages in Danger” website available at languagesindanger.eu was developed within the INNET project at Adam Mickiewicz University, Poznań, Poland. The project has received funding from the 7th Framework Programme under Grant Agreement n° 284415: Innovative Networking in Infrastructure for Endangered Languages (project acronym: INNET). One of the project’s deliverables was the Interactive Map that can be further developed and extended with teaching materials for any desired number of languages from all continents. 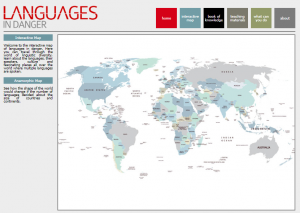